SYNOPSIS: A caretaker of a patient with extreme viremia due to Zika virus became infected by the virus by uncertain means, but most likely as a consequence of close contact with body fluids.

On June 25, 2016, an elderly patient (the index case) presented to a Utah hospital, dying of septic shock and multi-organ system failure. Examination of blood obtained from the patient two days before his death detected a level of Zika viremia that was 100,000 times greater than that generally reported in patients with Zike virus infection.

On July 1, 2016, an individual (Patient A) who had cared for the index case prior to his hospital admission developed fever, rash, and conjunctivitis. This individual had had close contact, including kissing and touching, with the index case. Zika virus nucleic acid was detected by real-time reverse transcription-polymerase chain reaction (rRT-PCR) in a urine sample collected from Patient A on July 8. Serum collected on July 12, after symptoms had resolved, was analyzed and found to have both IgM antibody and neutralizing antibodies to Zika virus.

Investigation found that the affected caretaker had not traveled to an area with ongoing Zika transmission, had not had sexual contact with a returned traveler, had not suffered mosquito bites, and was not an organ transplant recipient or recipient of transfused blood. Nineteen family contacts of the index case, many of whom had had close contact with him and had been present during cleaning of stool, urine, or vomitus, were tested and none were found to have evidence of Zika virus infection. Testing of healthcare worker contacts and community members from 238 households living within a 200 meter radius of sites where the index case had resided while ill has not detected additional Zika virus infections to date — although not all tests have been completed. In addition, adult mosquitoes trapped from the area are being tested for the presence of Zika virus nucleic acid — but none of the trapped mosquitoes have been identified as Aedes aegypti (which is known to transmit Zika) or Aedes albopictus (which is suspected to transmit the virus).

Human-to-human transmission of Zika virus has been documented to occur by several routes, including intra-uterine, intrapartum, sexually, via blood transfusion, and by exposure in the laboratory.1 In the United States, a total of 2,382 confirmed or probable cases of Zika virus disease with symptom onset from Jan. 1 to July 31, 2016, had been reported to ArboNET. (See Figure.) Of these, 99% were travel-associated. Among those infections acquired within the 50 U.S. states and the District of Columbia, 26 were mosquito-borne (in Florida), one was laboratory-acquired, and one — the index case discussed above — acquired the infection by an unknown mode of transmission. The index case was also the only fatality.

The means by which the Zika virus infection was transmitted to the index case remains unclear at this time, although it presumably was related to close contact with the index case who had an extraordinarily high level of viremia. As a consequence of this experience, CDC states that “… family contacts should be aware that blood and body fluids of severely ill patients might be infectious. Given recognition of high levels of viremia during illness, it is essential that health care workers continue to apply standard precautions while caring for all patients, including those who might have Zika virus disease.”

Figure. Number of Confirmed and Probable Zika Virus Disease Cases Reported from U.S. States and the District of Columbia, by Month of Illness Onset and Source of Infection — January 1–July 31, 2016 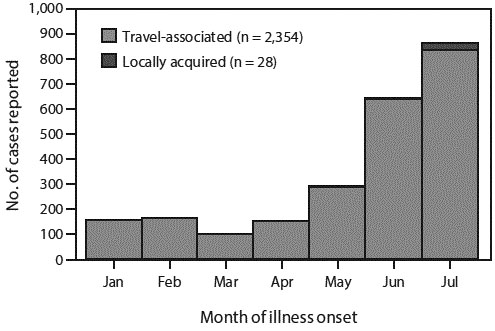 Screening for Latent Tuberculosis: An Update After 20 Years

Houston, We Have a Problem: Eosinophilic Meningitis in Children