News Brief: Use of CAM in the United States: Cost Data

SYNOPSIS: The incidence of Lyme disease appears to have stabilized in states with known high incidences of the infection, but there is evidence of geographic expansion into neighboring states.

Fourteen Northeast, mid-Atlantic, and upper Midwest states (Connecticut, Delaware, Maine, Maryland, Massachusetts, Minnesota, New Hampshire, New Jersey, New York, Pennsylvania, Rhode Island, Vermont, Virginia, and Wisconsin) accounted for 95.2% of all reports. (See Figures 1 and 2.) Three-fourths of cases reported from these states were confirmed. There was no significant change in the median annual percentage change in the number of reported cases in these states over the period examined and, in fact, there was a decreasing trend in seven of the 14 states. (See Figure 1.) In contrast, in 11 states and the District of Columbia that neighbor the 14 high-incidence states, the overall median annual change in confirmed cases was 6.6% (range, -16.7% to 31.3%), with an increasing trend in eight of the 11 states. Thus, there is evidence of geographic expansion of the disease.

Peaks in incidence by age occurred bimodally, at 5-9 years and at 50-55 years. Erythema migrans was reported in 72.2% of patients, while 27.5% had arthritis and 1.5% had carditis. A neurological manifestation was reported in 12.5% of patients, with facial palsy in 8.4%, radiculoneuropathy in 3.8%, and meningitis in 1.3%. Less than 1.0% had encephalitis. The proportion of patients with erythema migrans was lower in low-incidence states (64.7%) than in high-incidence states (72.3%), while the reverse was true for neurological manifestations (20.0% and 12.2%, respectively).

With more than 30,000 cases each year, Lyme disease is the most frequently reported vector-borne disease in the United States. The apparent stabilization of the reported incidence of Lyme disease from 2008-2015 could be real or could be the result of changing case definitions over the period examined. Of note is that the definition has been changed again in 2017, with the hope of increasing specificity. At the same time that the incidence of infections apparently has stabilized in high-incidence states, there is evidence that it is increasing in neighboring states, a finding consistent with evidence of an increase in the range of established populations of Ixodes scapularis, the vector of Borrelia burgdorferi. In the upper Midwest, Borrelia mayonii also causes Lyme disease and is transmitted by the same tick species. In the western Pacific region, the vector is Ixodes pacificus.

The clinical differences noted in cases in high- and low-incidence states may be due to the increase in false positives when tests are applied to low-prevalence populations. In addition, skin manifestations resembling erythema migrans may occur in states, including some with low incidences of Lyme disease, in which southern tick-associated rash illness is seen.

The apparent stabilization of cases in high-incidence states is encouraging. However, the geographical expansion into neighboring states can only engender concern. 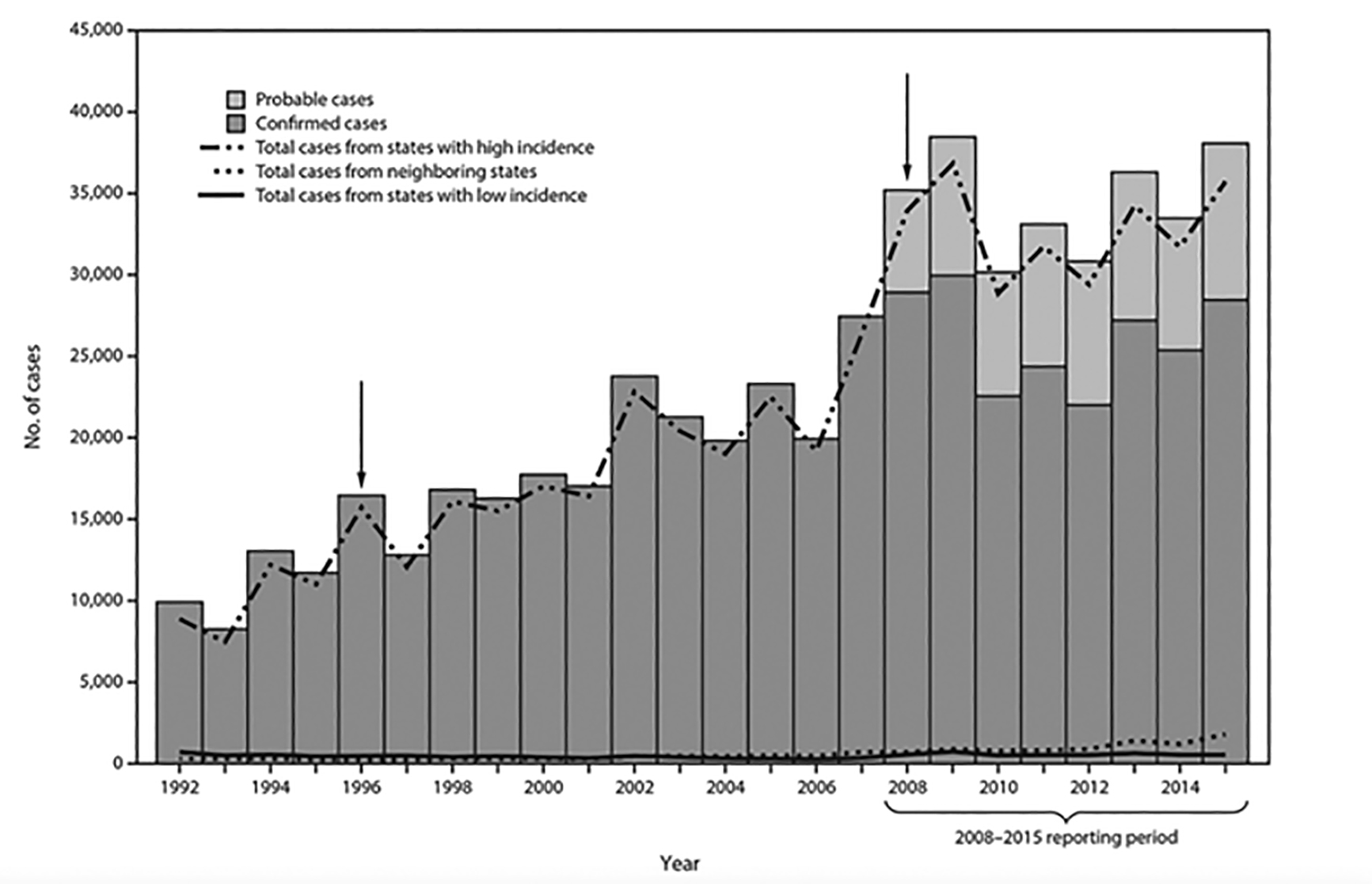 § Arrows indicate notable changes in case definitions. The case definition was revised in 1996 to recommend a two-step testing method and in 2008 to increase specificity of laboratory evidence of infection and to include provision for report of probable cases. 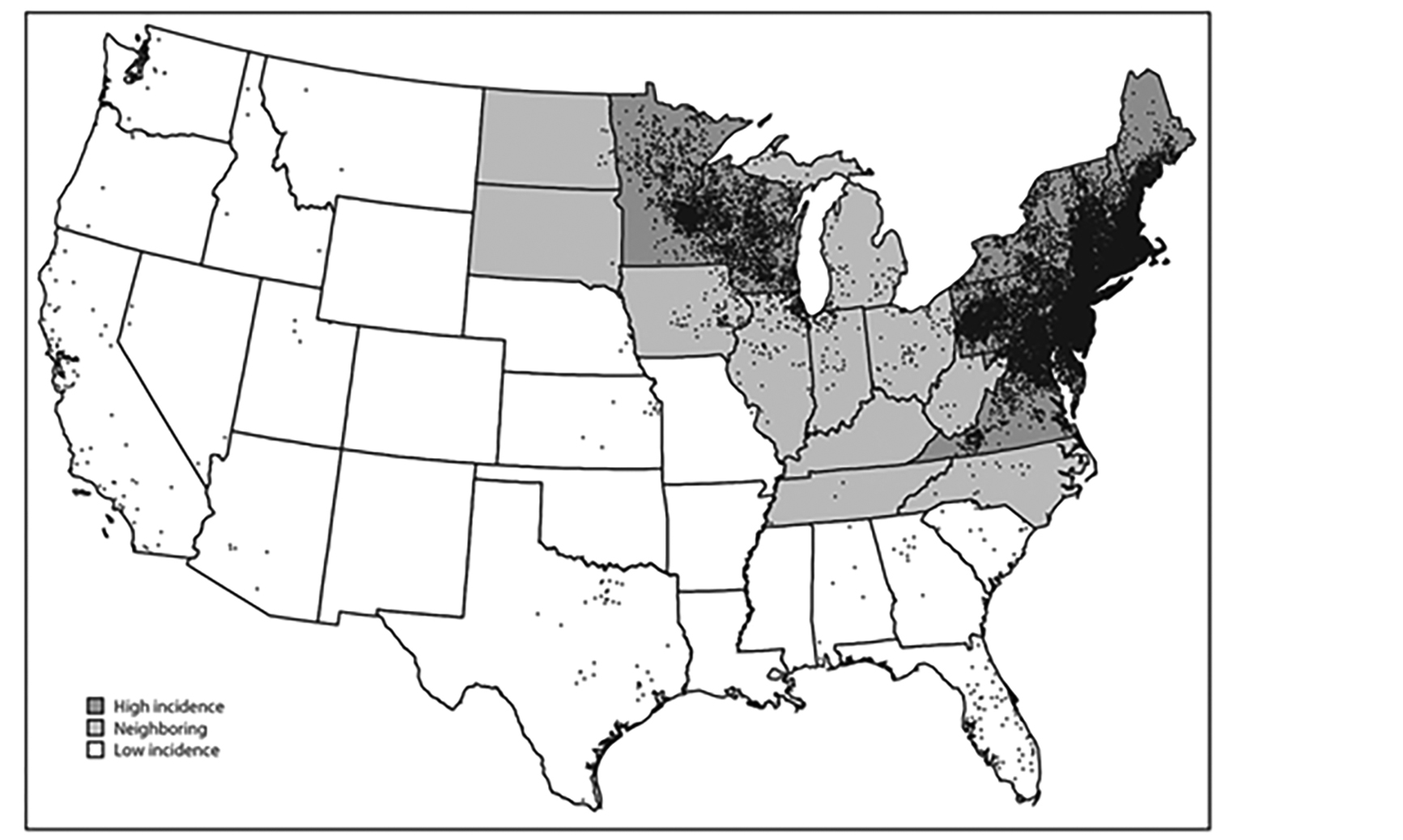 * Each dot represents one confirmed case according to the patient’s county of residence.