Panel to raise quality of care for heart patients

Outcomes at Hoag Orthopedic Institute in Irvine, CA, already were good when quality leaders thought they might improve even more if they posed blinded and coded data on patient-reported outcomes for the surgeons to see how they fared in comparison with their peers.

Proving once again that doctors are a competitive bunch, the posted data prompted an improvement in both outcomes and treatment volumes. The hospital also began publishing an annual “outcomes report,” showcasing the high rankings the hospital and its surgeons achieved to further reinforce and educate on the high-quality care and culture of excellence.

Hoag Orthopedic Institute is the highest-volume orthopedic hospital in California and has one of the highest volumes in the United States, says Executive Medical Director Alan Beyer, MD. The hospital is partly physician-owned and opened seven years ago.

“We committed from the outset that we were going to collect functional patient outcomes data way before anybody started talking about patient-reported outcomes, because our thinking was that the best way to measure your quality is to see how quickly the patient can get back to work and all the usual activities of life,” Beyer says. “The data isn’t important just so we can say 90% of our patients are satisfied. Anybody can say that. We use that data to drive clinical decisions.”

That means looking at each doctor’s patient-reported outcomes score along with traditional outcome scores for procedures such as knee and hip surgery, he says. If one surgeon is faring better than another, hospital leaders look to see what he or she is doing differently that might be adopted by everyone else, and those with low scores are counseled to identify the practice differences that are keeping them below par.

“Doctors, especially surgeons, have always tended to say their patients do the best. They’re confident in their work, and until you look at the numbers they’re not going to believe otherwise,” Beyer says. “When we can show them all total knee replacements and show where they fall on that scale, you can get their attention because it’s about numbers and not just their impression of how well they’re doing.”

The hospital also provides a confidential report card to each surgeon twice a year. The report card has been enhanced over the years and currently includes data on everything from procedure volume complications to quality case reviews and medical record completion. Here is an example of a report card for fictitious surgeon "Dr. Who": 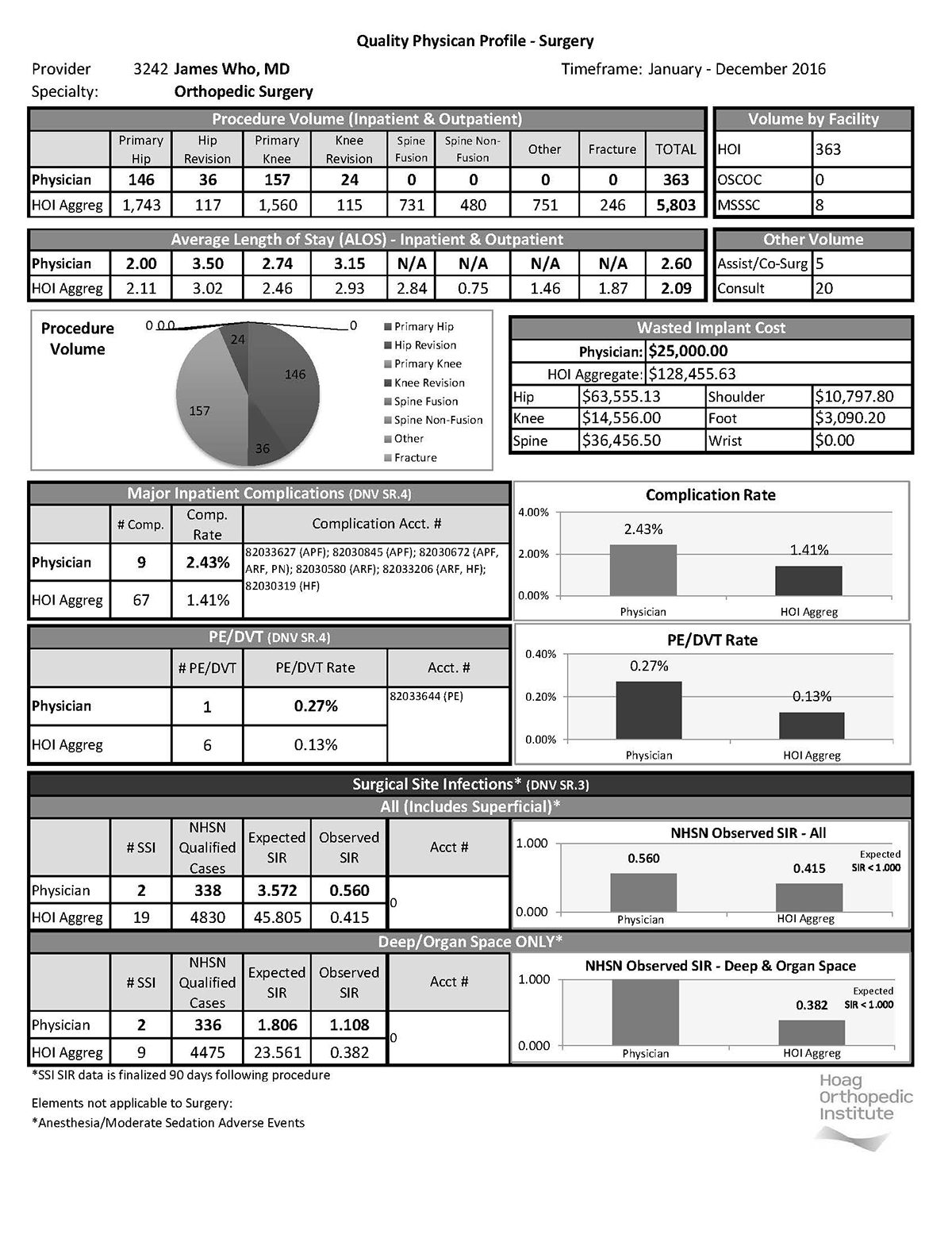 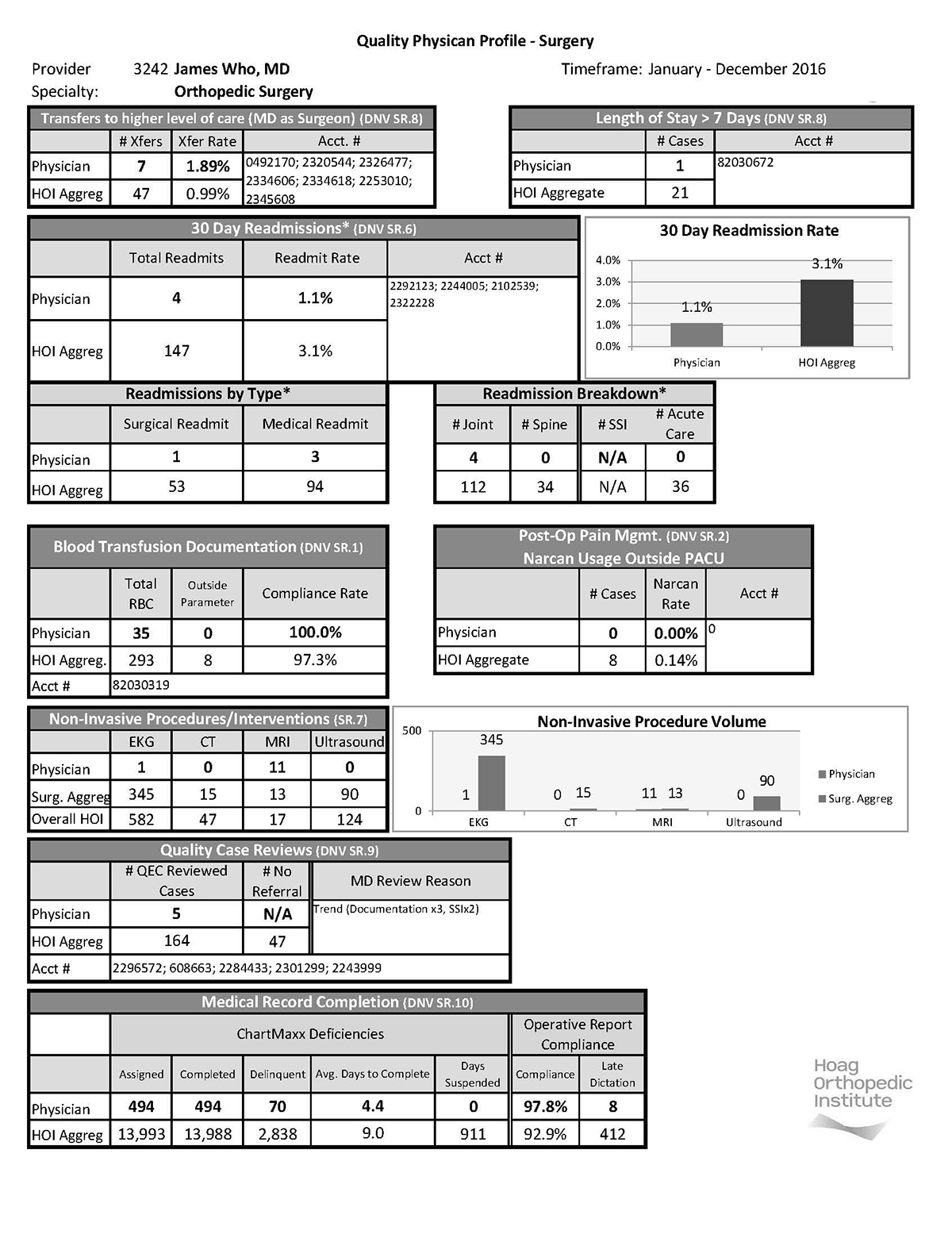 “These are metrics showing your cost of care, what you spent on implants, and what you spent on wasted implants — the numbers that determine your effectiveness and efficiency as a surgeon,” Beyer says. “It’s important to provide this information in a timely manner, because it’s no good to tell someone a year and a half ago you had a spike in infections. You have to tell them in real time because they’re probably not doing things the same way today as they did them a year or two ago.”

The report cards also show the aggregate numbers for the hospital, so the physicians get a clear picture of how the facility overall is faring on readmissions, for example.

“Nobody wants to be on the bottom, with the worst readmission rate or spending the most on transplants. Once you show them the numbers, it doesn’t take much prodding to make them improve,” Beyer says. “Seeing the numbers is enough to make them want to change and get off the bottom of the list. Give them real data and let them use that to drive their clinical decision-making.”

The fact that the hospital is partly owned by the physicians receiving those data means they have a direct financial interest in seeing improvement in not just their individual numbers, but also the hospital’s aggregate numbers. Beyer is not shy about pointing that out to the surgeons to further spur improvement.

“There is no better long-term motivator than those bills with Benjamin Franklin on them. You can tell surgeons that if you take these steps, not only will our patients fare better and be happier, but our financial performance also will improve,” he says. “This is a long-term motivator, something a surgeon sees every quarter when they do their quarterly financials, so it has more impact than something like a one-time bonus.”

Physician ownership in the hospital is not the only path to that motivation, however. The CMS Comprehensive Care for Joint Replacement (CJR) model can provide similar incentive, he notes, because it bundles payment and quality measurement for an episode of care associated with hip and knee replacements.

Hoag Orthopedic Institute maintains a separate profile for the CJR population and reports those data to surgeons in a quarterly meeting. If surgeons do not attend the meeting, the data are mailed to them.

“The way the CJR program lets physicians share in a bonus if there are good results is a healthy trend. There is no better way to get surgeons to sign on board for a little more work or a change in how they do things than to tell them, ‘There’s a little something in in this for you at the end of the day,’” he says. “That’s a very strong motivator.”

The hospital also incentivizes surgeons by requiring them to adhere to certain policies and expectations if they want access to patients under a bundled payment contract, Beyer says. The hospital has many contracts with private payers that involve bundled payment for certain procedures, which leave the hospital on the hook for complications or readmissions in the first 90 days after care begins.

Surgeons who do not adhere to the hospital’s clinical pathways and guidelines for those procedures cannot have access to those patients, Beyer says.

“Surgeons are always worried about the source of their patients, so you can motivate them by giving them unfettered access to the entire population of patients if they follow the bundled pathways and other guidelines that are important to you as an institution,” he says.

Whatever data you use, Beyer says it is crucial to avoid gaming of the system by the surgeons. Structure reporting and rewards so surgeons cannot manipulate the numbers by, for example, discharging patients before they are ready just to lower their length of stay numbers. “That will come back and bite you because you’ll have readmissions if those patients are sent home too early,” he says. “So you have to put some thought into how the numbers are formulated and not leave an opening where a doctor can make one number look better because he or she benefits from that, but makes another worse and they don’t care because they have nothing at stake there.”