Dr. Deresinski does research for the National Institutes of Health and is an advisory board member and consultant for Merck. This article originally appeared in the August 2014 issue of Infectious Disease Alert.

SOURCE: Centers for Disease Control and Prevention and Association of Public Health Laboratories. Laboratory testing for the diagnosis of HIV infection: Updated recommendations. Available at http://www.cdc.gov/hiv/pdf/HIVtestingAlgorithmRecommendation-Final.pdf.

Recommendations for testing for HIV infection
have continually evolved as the result of improving technology and clinical knowledge. The latest generation assays allow earlier detection of infection and avoid the frequent false-negative and indeterminate results seen with use of Western blot or immunofluorescence assays (IFA) for confirmation in patients with early infection. This is of importance because of the recognition that the risk of transmission is highest during the acute early phase of infection and because treatment is beneficial in all phases of infection, including the early phase. Furthermore, while HIV-2 infection remains rare in the United States, use of the HIV-1 Western blot misclassifies the majority as HIV-1 infection. Western blot and IFA tests are no longer included in the testing algorithm.

As a consequence of this evolution, the Centers for Disease Control and Prevention and the Association of Public Health Laboratories have provided new recommendations for HIV testing of serum or plasma that supersede previous ones (see algorithm). The changes take into full account the sequence of appearance of laboratory markers in the course of HIV-1 infection. Thus, HIV-RNA becomes detectable by nucleic acid amplification tests (NAT) approximately 10 days after infection and increases to very high concentrations. Four to 10 days after viral RNA is detectable, fourth-generation immunoassays are able to detect P24 antigen, but this is transient as the result of the appearance of antibody — unless special methods to disrupt antigen-antibody complexes are used. IgM antibody may be detected by third- and fourth-generation immunoassays 3-5 days after P24 antigen is first detectable and 10-13 days after the appearance of viral RNA. The sequence can be more broadly considered to consist of an initial eclipse period when no markers are detectable, a seroconversion window between initial infection and first detection of antibodies, acute HIV infection describing the interval between HIV RNA and antibody detectabilities, and established HIV infection beginning with a fully developed IgG antibody response. 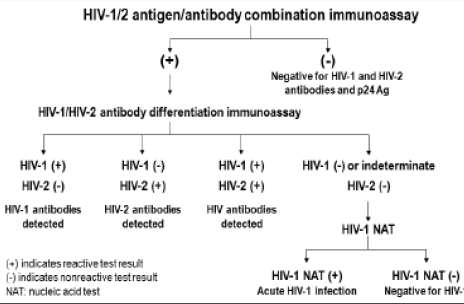 These recommendations emerge from the continuing advance in the technological and clinical aspects of testing for HIV-1 infection. The elimination of Western blot and IFA testing for confirmation of the presence of specific antibody is important given the subjectivity and both indeterminate falsely negative results seen with these assays. The ability to detect HIV-1 infection in its earliest phase provides the opportunity to initiate treatment that is clinically beneficial to the patient and reduces the risk of transmission during a time when viral loads reach their highest levels in plasma in the absence of therapeutic intervention.

Is the Routine Pelvic Exam Obsolete?