The bottom of the iceberg: Is there a hidden hepatitis epidemic beneath all of the outpatient outbreaks?

Synopsis: An outbreak of food poisoning by Yersinia pseudotuberculosis in Finland in October/November 1998 involved 46 cases and was traced to locally grown iceberg lettuce.

An outbreak of infections due to Yersinia pseudotuberculosis serotype O:3 occurred in Finland from October 15 to November 6, 1998. Locally grown iceberg lettuce was identified as the source. The infection had come to light because laboratories in Finland routinely screen faecal samples from patients with acute gastroenteritis for this organism and report any isolates to the National Infectious Disease Registry. Of the 47 cases identified, 1 with bacteremia died and 5 others underwent appendectomies. A case-control study was done to determine the factors involved, and only iceberg lettuce emerged as a risk factor with 71% of cases having eaten this compared with 43% of controls, yielding an odds ratio of 3.8 (95% CI,1.3 - 9.4). There was also an apparent dose-response insofar as 29% of cases ate lettuce more than 5 times a week, compared with 3% of controls (odds ratio, 11.8). Nuorti and colleagues also set about trying to trace the source (see Figure, below). Although they were unable to isolate the strain in question from the lettuce which were long since gone, they did manage to recover Y. pseudotuberculosis from soil, irrigation water, and 2 lettuce from 1 of the farms. Although not incontrovertible, the evidence assembled by Nuorti et al is sufficiently compelling to show that Y. pseudotuberculosis can and does cause food-borne infection, can be acquired from fresh produce such as lettuce, and can lead to significant morbidity, including appendectomies. 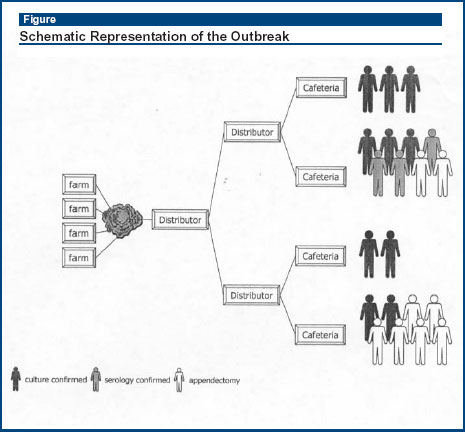 Although this is the first report of its kind concerning the capacity of Y. pseudotuberculosis to cause a food-borne infection outbreak, it may not be the last. In an accompanying editorial, Tauxe (J Infect Dis. 2004;189:761-763) points out that there may be little we, as consumers, can do to prevent these. Firstly, it seems unlikely that simple surface contamination of lettuce and other fresh produce by irrigation, washing, or other handling procedures accounts for the risk. Instead, Yersinia, like its cousins Escherichia, Shigella, and Salmonella, is quite content to settle in moist soil, and can be taken up through the roots to disseminate throughout the plant including the edible leaves. In our glasshouse world, we often forget that bacteria have had a much longer relationship with plants than with animals, and human variants may still have the capacity to rekindle ancient links when the opportunity arises. With globalization, the risk that contaminated fresh produce will cross borders, and even continents, is greater than ever before. So, local inhabitants, and those further afield, may experience similar problems. Personally, I avoid eating lettuce in restaurants because of the risk of surface contamination. It seems now that I might have to reconsider lettuce as part of my domestic diet if these enteric bacteria are, in fact, the tip of the iceberg. Consumer confidence in safe foods is being continually shaken by events. Perhaps it is now time to employ a similar trace-back procedure as Nuorti et al attempted with some success, and to implement tests for the weak links in the chain. This might offer a more durable solution than reaching for the irradiation, at least here in Europe. The Finns have to be commended for sustaining laboratory surveillance, for freeing sufficient resources to get to the bottom of the outbreak, and for showing us how to investigate similar events when they occur on our own patch.

Dr. Donnelly is an editor of Infectious Disease Alert. This article was published in the August 2004 issue.

New Products Show Promise in the Control of Field Hemorrhage