Calcium Plus Vitamin D Supplementation and Cognitive Decline in Women

Vitamin D Supplementation and Bone Mineral Density: Is There an Effect?

Dr. Pantuso reports no financial relationships relevant to this field of study.

Serum vitamin D (25(OH)D) has been demonstrated to be associated with the severity of Parkinson's disease (PD) by a number of researchers. In a previous study conducted by the same authors, it was found that higher 25(OH)D serum levels were significantly associated with decreased severity of PD measured by the Hoehn and Yahr stage (HY) and the Unified Parkinson's Disease Rating Stage (UPDRS) scores in PD patients. The authors also found that the VDR FokI CC genotype was also associated with a milder form of Parkinson's disease. Single nucleotide polymorphisms (SNPs) in the VDR gene may alter the function of the receptor and how the VDR receptor interacts with 25(OH)D. To further examine the role of 25(OH)D and VDR genotypes in PD, the authors conducted a double-blind, placebo-controlled trial at Katsushika Medical center in Tokyo, Japan.

The authors enrolled a total of 114 PD patients aged 45-85 years and randomly assigned them to either the placebo or 1200 IU/day of vitamin D3 group for 1 year. UK Parkinson's Disease Society Brain Bank inclusion criteria were used. The patients needed to be diagnosed with PD by two or more neurologists, and not have first- or second-degree relatives with PD. Fifty-eight patients were randomly assigned to the placebo and 56 patients were randomly assigned to the 1200 IU/day vitamin D3 group. The vitamin D3 was purchased from Zenyaku Co Ltd. Blood pressure, body mass index, levodopa equivalency dose (LED), serum calcium, parathyroid hormone, liver and renal function tests, and serum concentrations of 25(OH)D and 1,25(OH)D were measured at enrollment and 12 months. To measure PD severity, the modified HY stage, UPDRS, Mini-Mental State Examination (MMSE), EuroQol 5 Dimension (EQ-5D), and Parkinson's disease Questionnaire-39 (PDQ39) were also measured at baseline and 12 months. Patients were followed up every 0.5-3 months to monitor disease progression and to adjust drug doses. To evaluate VDR genotypes and vitamin D binding, protein polymerase chain reaction and direct sequencing techniques were used.

Intention-to-treat analyses were conducted based on 55 patients in the vitamin D3 group and 57 patients in the placebo group. A total of 10 patients withdrew from the study and this was not significant between the two groups. Compliance was 96.5% in the placebo group and 89.1% in the vitamin D3 group. The mean age of the study population was 72 years old. Tables provided by the authors demonstrated that both groups were similar in regards to patient characteristics. No significant differences between the vitamin D3 and placebo groups were noted with 25(OH)D and 1,25(OH)D serum levels at baseline. There were also no significant differences demonstrated with respect to VDR or GC genotypes between the groups. Twenty-two percent of the total participants had vitamin D levels at ≥ 30 ng/mL and were considered vitamin D sufficient, while 48% of the total participants had vitamin D levels < 20 ng/mL and determined to be deficient.

UPDRS part II scores were worsened from baseline to 12 months in the placebo group (P = 0.004) and remained stable in the vitamin D3 group. There was also a statistical significance between the groups' UPDRS part II scores (P = 0.004). There were no differences found with UPDRS total or parts I, III, or IV between groups. No differences were found on MMSE scores between or within groups. The vitamin D3 group had significantly improved scores on the PDQ39 compared to the placebo group (P = 0.04).

The authors did not comment on any vitamin D3 intra-group differences (i.e., deficient, insufficient, or sufficient 25(OH)D levels at baseline) on any of the study results between baseline and 12 months.

This study is an important addition to the growing body of evidence suggesting that low vitamin D status may be a factor in PD symptomatology, and that daily vitamin D3 supplementation may stabilize PD severity without side effects. This research study offers compelling evidence that the vitamin D pathway requires further elucidation to understand how the different FokI VDR genotypes effect the function of the pathway in PD. VDR is expressed in the dopamine-rich substantia nigra of the brain, and the active form of vitamin D (1,25(OH)D) has been shown to increase the expression of the rate-limiting enzyme tyrosine hydroxylase in the production of dopamine, further pointing to the role of vitamin D in PD (see Figure 1). The optimum vitamin D (25(OH)D) levels for brain health have yet to be determined and require more research. In this study, 22% of the total participants had vitamin D levels ≥ 30 ng/mL and were considered vitamin D-sufficient while 48% of the total participants had vitamin D levels < 20 ng/mL and were determined to be deficient. The authors neglected to comment on the 30% of the patients who had insufficient vitamin D levels between 20-29 ng/mL. 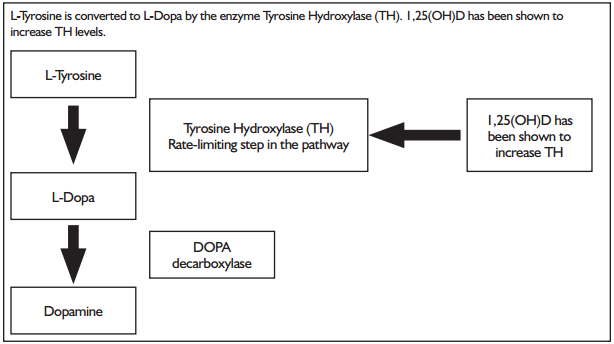 There were a number of limitations in this study. The study population was modest in size (n = 114) and some patients had early PD and others had more advanced PD. The study population appears to be mostly Japanese as the study took place in Tokyo, Japan, and the authors did not comment on the ethnicity of the study participants. VDR FokI polymorphisms show ethnic variation. The VDR FokI polymorphisms investigated by the authors in this study were CC:CT:TT and the ratios for these polymorphisms in the study population were 34:52:14, respectively. The ethnic variation ratios of the CC:CT:TT VDR FokI polymorphisms are as follows: African, 42:48:10; Hispanic, 46:46:8; Pacific, 29:58:13; and white, 40:47:13, respectively. Because of the ethnic variation in the VDR FokI polymorphisms, it may be an important variable for further studies to include ethnicity as to increase the clinical utility of the results. This randomized, controlled study investigating the relationships between vitamin D3, PD, and VDR genotypes provides quite compelling evidence that vitamin D3 supplementation as an adjunctive treatment in PD may be efficacious.1 As vitamin D is relatively inexpensive, commonly available, and did not demonstrate adverse side effects when dosed at 1200 IU/day, it is a reasonable approach to supporting brain health in PD patients.

Spiritual Care at the End of Life: Who Defines a Good Outcome?

Herbal Authenticity as per DNA Barcoding in Canada