Continuous Renal Replacement Therapy: How Good is the Evidence?

Timing of Initiation of Renal Replacement Therapy in the ICU

What is crrt? since kramer introduced continuous arteriovenous hemofiltration (CAVH) using a hemofilter placed at the arterio-venous shunt,1 this modality evolved as continuous veno-venous hemofiltration (CVVH) using a blood pump, and subsequently as continuous veno-venous hemodiafiltration (CHDF), allowing the dialysate perfused outside the hollow fibers of the hemofilter to facilitate the osmotic dialysis. These modalities are together known as continuous renal replacement therapy (CRRT), particularly in areas in which this method of treatment has been widely adopted—mostly in Europe, Australia, and Japan. A schematic representation of the various types of CRRT is shown in the figure. 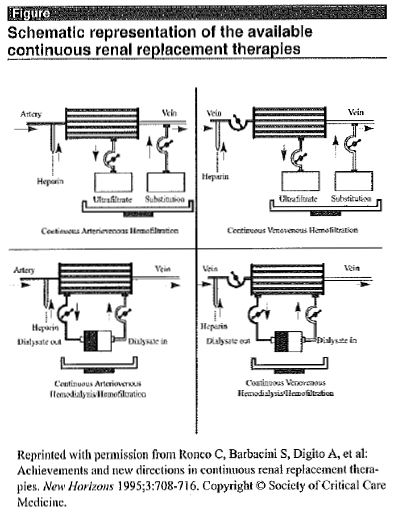 CRRT is used for critically ill patients with renal failure who are in an unstable circulatory state because of its moderate speed of volume replacement and allowance of sufficient nutritional support. Another advantage of CRRT is that it can extract larger molecules in comparison to conventional hemodialysis because the pore size of the hemofilter, which is made of polyacrylnitrite and polysulphone, accommodates molecules of molecular weight (MW) up to 30,000. This facilitates the extraction of larger MW substances such as TNF-alpha and cytokines through a convection mechanism.

Clearance of a large MW substance from the blood depends on the ultrafiltration rate and sieving coefficient (its concentration in the ultrafiltrate; its concentration in the blood). The sieving coefficient depends on the MW and electric discharge, affinity to the filter membrane, and protein-bound status of the given substance. The circulating perfusate outside the hollow fibers facilitates the extraction of the molecules, which generate osmotic force. Osmotic extraction of the substances depends on the blood and perfusate flow rates and osmotic pressure gradient generated by the given substance between the perfusate and blood through the hemofilter. Therefore, clinician-controlled volume status of patients with renal failure and possibly preferential clearance of proinflammatory and toxic substances by the convection mechanism are the background rationale for the use of CRRT in the treatment of sepsis.

Is CRRT Effective in Sepsis?

Several issues remain to be clarified in order to validate this therapy as a treatment of sepsis. First, the methods for performing CRRT differ markedly among institutions and investigators. The rate of volume replacement during hemofiltration has ranged from 5 to 50 L/d, with and without simultaneous hemodialysis. The dialysate perfusion rate has also ranged from 0.5 to 1.0 L/h. Therefore, the optimal combination of hemofiltration and dialysate perfusion rates is not yet determined. Additionally, when a significant volume of plasma water is replaced by hemofiltration, the role of continuous dialysis superimposed on hemofiltration is unclear. The pore size of the filter is too large to allow osmotic diffusion, resulting in simple mixture of the plasma water with the perfusate. Also, the membranes used by the investigators have different pore sizes, affinity for the target substances, and sieving coefficients. Therefore, clearance of a given substance also depends on the materials used as a membrane.

Secondly, precise measurement of the ultrafiltrated and replaced volume is essential for accurate control of the circulating volume of the patient. Because a large amount of fluid can be withdrawn and replaced by the fluid pump in a short time, even a small error in calibration and/or in function of the fluid pump can lead to either tremendous over- or underhydration of the patient. Although a home-made system can be assembled by modification of the conventional system, a specially designed machine is usually required to accomplish the accurate volume replacement. Stand-alone machines may be sufficiently reliable; however, to confirm their accuracy, frequent measurement of body weight is mandatory, which requires additional work for caregivers and poses another potential risk for the patient.

Thirdly, controversy has existed as to what extent cytokines are removed by CRRT, and whether this affects the clinical course of the patients. For example, MW of TNF-alpha and IL-1-beta are 17,000 and 17,500 daltons, respectively, and these substances are mostly removed by convection. Therefore, pure convection (CHF) accomplished by a larger volume replacement is probably preferable. Additionally, a bioactive form of TNF-alpha is present in the blood as trimer (MW:54,000), which is unable to penetrate the hemofilter. Furthermore, most of the cytokines are present in the blood as a protein-bound form (with alpha-2-macroglobulin and soluble TNF receptor), which are obstacles with regard to convective clearance.

Another argument on cytokine clearance is the interpretation of the blood concentration of the cytokine. Cytokines are local mediators and their half-lives are 5-20 minutes. Therefore the measurable cytokine levels in the blood are the resultant balance between the spill-over cytokines produced from the local tissues and their degeneration in a tremendously large distribution volume. Even though a significant amount of cytokines are removed by CRRT through convection and/or adsorption to the membrane itself, its overall effect on local concentration of cytokines is unknown.

How Good is the Clinical Evidence?

To evaluate the clinical relevance of this modality to sepsis or septic shock, I searched MEDLINE for clinical trials. There was no randomized controlled clinical trial (Level I or II) on this topic.2

However, several non-randomized studies were retrieved. Barzilay et al3 divided 39 septic patients with oliguria or anuria into four groups (control, CAVH+PE, CAVH, and CAVHD) and found a significant difference in mortality among the groups. However, the authors did not describe their statistical analysis, and there was no significant mortality difference among the groups if chi-square analysis with a contingency table was used. van Bommel et al compared hemodynamics, BUN, creatinine, and mortality in acute renal failure patients who received either intermittent hemodialysis or CAVHD.4 The APACHE-II scores were higher in the CAVHD group, but mortality was not significantly different between the groups, leading the authors to speculate that CAVHD improved mortality in the patients with acute renal failure (Level III). Sugai et al divided septic patients into two groups who received either CHF/CHDF or HD/HD + CHF, and found that the number of failed organs was smaller in the CHF/CHDF group, but no significant difference was found in mortality between the groups (Level IV).5 The other available reports on CRRT for sepsis, so far, are accumulations of case reports and are insufficient to demonstrate the advantage of this therapy over the conventional treatments.6-19

In order to establish CRRT as a recommended modality for septic patients, a multi-center, randomized, controlled clinical trial is inevitable, focusing on the following issues:

Until such a trial proves the advantage of CRRT over conventional therapies, it cannot be recommended as part of the clinical management of sepsis or septic shock.

Continuous Renal Replacement Therapy: How Good is the Evidence?