Assent Is Not Consent: Children in Clinical Trials Are Not Little Adults

Respiratory Syncytial Virus — Not Just a Disease of Children

Diagnosis errors are a system problem, not just doctor’s fault

Synopsis: The Binax NOW chromatographic assay was found to be the optimal method for detection of RSV in upper respiratory secretions of children, while DFA testing was optimal in adults.

Ohm-Smith and colleagues at San Francisco General Hospital evaluated 4 assays for the detection of RSV in nasal and/or nasopharyngeal wash, aspirate, or swab specimens from adults and children with suspected viral respiratory infection during the 2002-2003 respiratory illness season. The results were compared to those obtained by cell culture.

The results obtained with the assays were all comparable when applied to samples obtained from children, with the NOW assay being the most sensitive and specific. With samples from adults, however, DFA was the only effective test among those evaluated (see Figure, below). 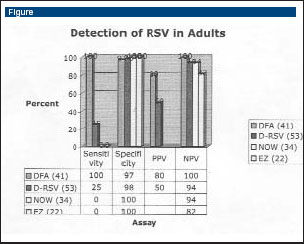 The diagnosis of RSV infection is important for epidemiologic and clinical reasons. Hospitalized patients require adequate isolation and, although only selected high patients are candidates for antiviral therapy, a confirmed diagnosis allows the avoidance of unnecessary antibacterial therapy in others.

This study found that the rapid assays performed well in children, but that the NOW assay provided optimal results in this patient group. In stark contrast, only the DFA provided useful results in adults. Unfortunately, DFA, in contrast to the other rapid methods studied, is more labor intensive and requires highly trained technologists—individuals in short supply, especially in "off hours." Furthermore, a recent study found that DFA had a sensitivity of only 23% in adults with RSV infection.1 That investigation differed, however, from the one reviewed here, in that the "gold standard" was either a positive culture, serology, or PCR, while the current one relied only on culture. Nonetheless, the current guidelines of the Infectious Disease Society of America, for the management of immunocompetent adults with community acquired pneumonia, state "Respiratory syncytial virus (RSV) antigen detection tests are readily available but are insensitive for detecting infections in adults and are not generally recommended for adults."2

Ohm-Smith and colleagues agree that while the Binax NOW assay appears to be optimal for use in children, none of the rapid kit assays other, than DFA, were useful in adults. Their data does, however, suggest that DFA, does in fact, have value in adults for whom they suggest a 2-step procedure: "Laboratories should consider performing direct immunofluorescence and/or culture testing of specimens from adults that give negative results with any of the rapid kit tests."

The Challenge of Right-Sided Endocarditis

Erythromycin and the Heart

Rifaximin: Another Choice for Treatment of Travelers’ Diarrhea