Creatine remains one of the most popular supplements for athletes, especially to enhance power and speed. A large body of research evidence supports claims that creatine enhances power output during short maximal bursts of exercise, such as power lifting or sprinting.1 The benefits are noted particularly when short exertions are repeated intermittently in what is called interval training. However, some benefits also have been found for endurance exercise.

Although much of the focus on creatine has been on athletes, maintaining muscle mass and strength is also important for older adults. Aging is associated with loss of muscle mass and decreased strength, which can negatively impact activities of daily living and quality of life.2 Such changes can increase the risk of falls, which can be a major problem with aging.

Sarcopenia refers to a condition that occurs when fat-free mass is more than two standard deviations below normal.3 Approximately 25% of those older than 70 years of age have sarcopenia, increasing to nearly half of those over 80 years.3 It has been estimated that a 10% reduction in the prevalence of sarcopenia in the United States could save more than $1 billion per year.4 Resistance training is effective at counteracting sarcopenia, as is testosterone administration.2 However, concerns about the latter's adverse effects have led to interest in other, safer interventions, with creatine supplementation of major interest. Given the prevalence of sarcopenia, and an aging population, this article will review the available evidence on creatine supplementation to reduce age-related loss of muscle mass and strength.

Creatine is synthesized in the body from the amino acids arginine, glycine, and methionine. Adults generally make 1-2 g of creatine daily, which is later broken down to creatinine and excreted at a rate of about 2 g per day.2 To provide for additional needs, creatine can be obtained from the diet, especially from meat and seafood.3

After synthesis or ingestion, creatine is transported primarily to skeletal muscle where about 95% of the body's creatine is stored. About two-thirds of the creatine in skeletal muscle exists as creatine phosphate (CP), with the remainder found as free creatine.1 As muscles work, CP is used to replenish adenosine triphosphate (ATP) (see Figure). ATP is the muscle's biochemical energy molecule and is converted to ADP as its energy is used. Muscles normally store enough ATP for only a few seconds of exertion, after which CP can provide fuel for an additional 4-6 seconds of intense exercise. This all depends on the muscle's free creatine concentration. Hence, it has been hypothesized that if supplementation increased the muscle's creatine levels, more energy would be available during exercise. 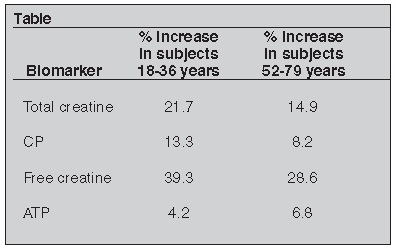 Creatine was first identified in 1832 and its metabolism was studied extensively over the next century.2 Subsequently, interest faded until the British sprinter, Linford Cristie, revealed in 1992 that he had taken creatine during the preparations that led up to his Olympic gold medal.2 Shortly afterwards, studies demonstrated that creatine supplements did increase muscle creatine levels and exercise performance.5 Since then, several hundred studies have been published on the topic.2 Much of the interest in creatine for older adults is derived from extrapolations from the sports science research.

The first double-blind study to examine creatine use with resistance training in elderly, sedentary adults was published in 1998.6 Thirty-two men and women (67-80 years old) were randomized into four groups: creatine with resistance training, placebo with training, creatine without training, and placebo without training. None of the participants did weight-lifting before the study, and all were sedentary-to-moderately active. Creatine dose was 20 g/day for 5 days, followed by 3 g/day for a total of 8 weeks. Resistance training was carried out three times a week. No significant changes in body mass or body fat were found in any group. Training groups had significantly increased strength and endurance compared to those not training (P < 0.02). Creatine supplementation did not provide any additional benefit.

Three reviews have recently been published and identified a total of 12 relevant trials.2-4 All 12 studies were randomized, placebo-controlled, and double-blinded. They were similar in enrolling around 20-40 subjects older than age 65 years and either used a creatine protocol similar to that described above or gave subjects 5 g/day for a number of months. The longest study, which lasted 1 year, reported no significant differences between its groups.7 Out of the 12 studies, seven found significant beneficial effects on fat-free muscle mass and/or strength, and five found no beneficial effects on muscle mass or strength.

Some studies have examined the timing of creatine ingestion and suggested that this may be more important than the actual dose of creatine.8 Exercise stimulates muscle protein degradation and synthesis. Synthesis predominates when protein or amino acids are ingested shortly before or after exercise, hence the current popularity of protein shakes being consumed by athletes immediately after workouts. Part of the reason for these effects is increased blood flow to muscles after exercise. This has been hypothesized as a way to more efficiently transport ingested creatine to muscles. A small number of studies have found that ingesting creatine immediately before and after exercise leads to greater gains in muscle mass than when creatine is ingested in the morning and evening, away from training times.3

Creatine supplementation among athletes frequently leads to a 1-3 kg weight gain, probably due to intramuscular water retention.9 Concerns often are raised about cramping when creatine is taken in conjunction with exercise, although this has not been supported by studies.1 Anecdotal reports claim creatine supplementation can cause gastrointestinal problems, though these are not frequently reported in studies. One study with older men found significantly more reports of loose stools during creatine loading than with placebo, and during maintenance dosing, more muscle cramping and strains with creatine.10 Occasional case reports report more serious adverse affects, in particular involving renal and hepatic function, but evidence to support these have not been found in studies.11 However, those with renal disease or at risk of renal dysfunction are usually recommended to avoid creatine supplementation or monitor renal function carefully if creatine is taken.1

No drug interactions are known, although concerns about the potential for renal toxicity raise issues about drugs metabolized through the kidneys.

Creatine is readily available from meat and fish (containing roughly 4-5 g/kg), and therefore, is classified as a dietary supplement, not a drug. As a supplement, it is most commonly available as a monohydrate in powder, candy, gum, and liquid. Many synthetic derivatives are available, including creatine malate, creatine pyruvate, creatine citrate, creatine-magnesium chelate, creatine ethyl ester, and many more. Claims that any one of these is more effective than another have not been supported in the few independent assessments available.1 Numerous products combine creatine with vitamins, nutrients, and other supplements, but clinical studies of these were not identified. Athletes usually "load" with 20-25 g creatine per day for 5-7 days (usually 5 g qid), followed by one 2 g daily dose. Studies with older people have used this regimen, or they were given 2-5 g per day.

Numerous studies of creatine supplementation by athletes have demonstrated beneficial effects on muscle mass and strength after high-intensity exercise. Such research with older adults is less extensive. Most, but not all, studies support a beneficial effect on muscle mass and strength either with or without resistance exercise. It remains unclear whether muscle creatine storage decreases with age, or whether this is a function of reduced activity and dietary creatine intake. If it is the latter, this may explain some of the variability obtained in the studies conducted to date.

Resistance training is beneficial in preventing or reversing the loss of muscle mass and strength that occurs with aging. Creatine supplementation alone or in addition to exercise may enhance these effects. Adequate hydration is important to avoid cramping problems. In addition, preliminary results suggest that creatine may have other beneficial effects during aging, particularly a slowing of cognitive decline.2 However, the equivocal nature of the results to date suggest either that only some people benefit from creatine supplementation, or that more needs to be understood about how creatine is administered. It appears that taking creatine immediately before or after exercise may be more important than how much is taken. While creatine supplements are safe, similar benefits may be obtained from dietary creatine, such as by eating a meal with red meat or seafood immediately before or after exercise.

The HCG Diet: Does It Work?

Sweat Your Heart? Sauna for CHF

The Portfolio Diet: A Menu for Hyperlipidemia Treatment